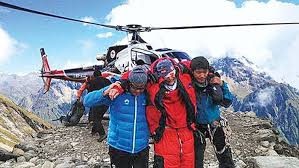 A post New Year walk took place for those attempting to come to terms with their over-indulgence at Christmas 2015.

The walk was graded M although it contained some rough footpath downhill to the sea.

At a  benign part of the walk a lady was unlucky enough to slip, fall and break her ankle.  She was immediately in pain and the angle of her foot left no room for misinterpretation.  Fortunately a retired GP was on the walk.  She confirmed the diagnosis and the emergency services were called.

While waiting for almost an hour for a team from the police to arrive in order to make an assessment the patient was cold (partly from shock).  Although it was a sunny day there was a stiff breeze blowing along the coast.

Once the police arrived they quickly summoned a helicopter and the patient was taken first to an ambulance at the beach and then to hospital.  Her husband had to make his own way! 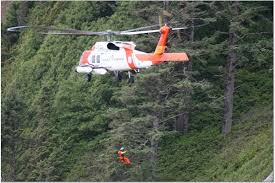 A man who walked regularly with the CBMW and his wife took a holiday in S. Africa, part of which was dedicated to walking in some of the local mountains.

During a strenuous day of walking they summited a peak of some 3000m.  On the way down he tripped and fell some 3m and was briefly unconscious.

His injuries included a head wound and bad lacerations to his left hand which made it impossible for him to scramble down further.

Fortunately there were others in the immediate vicinity who were able to offer help.

After lengthy conversations with the emergency services he was winched off and taken to hospital.

In both these cases there was a happy ending.  Make sure that you are properly prepared before you venture out in the mountains.