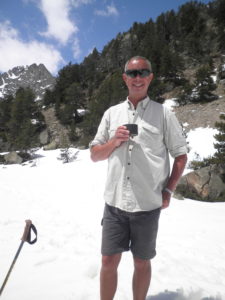 Jo joined the CBMW as a ‘resident’ walker back in 2013 having retired and decided to live full time in Spain. Jo has always enjoyed the outdoor life having spent 39 years in the military.  He is a keen sportsman who enjoys skiing, scuba diving and of course mountain walking.  Whilst with the military, he has led expeditions in the Lake district, Cairngorms and Snowdonia in the UK, Norway, Southern Germany, Austria, Switzerland and France as well as the Empty Quarter in Saudi Arabia, the Hajjar mountain of Oman and the Eastern Mountains of Nepal (a few years ago now!).

STOP PRESS & NOTICES -use ‘Contact Us’ form to add information to this section.